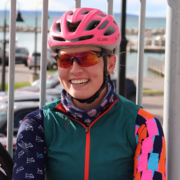 Jillian grew up running 5ks with her brothers and chasing after horses who had escaped from the barn area. She joined the high school cross country team with her some of her brothers, so she literally knows how to “run with the boys.” Since she was raised on a horse farm, much of her time was also spent working with and riding horses. She went on to compete in the disciplines of eventing and dressage (Google it!) with her four-legged teammates through high school and into her first few years of college. (Go Green!) It wasn’t until her horse unexpectedly died that she even considered riding a bike, but when her mom wanted a companion for RAGBRAI in 2018, she dusted off her brother’s first racing bike to join her mom in Iowa’s corn fields.

In the spring of 2019, Jillian moved back home to Kalamazoo, and after not riding since the previous summer, decided to give cycling another chance with the Kalamazoo Bicycle Club…and then she was finally hooked. During another round of RAGBRAI, she was urged to consider racing, so before her second week-in-the-corn was over she had signed up for her first race, where she earned herself a spot on the podium. She will be pursuing road and gravel races, as well as cyclocross in the coming season.