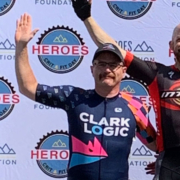 I was born in Kalamazoo.  I have worked for the Kalamazoo Department of Public Safety since 1999.  Prior to that I was a paratrooper in the US Army and was a police officer in North Carolina for 7 years.   I am married to Sam, and have three sons, Brendon, Andrew, and the youngest, Nathan.   We live in Mattawan, and also own a home in the East Tennessee Mountains that we visit when we have time.

I raced oval track pavement super late models and open wheel modifieds for the McDonald’s Corporation for 10 years throughout the Midwest.  I retired from car racing cars in 2010 for many reasons, but the biggest was that I was suffering the effects of repeated head injuries.

In the fall of 2014 I felt sluggish and quite out of shape.  I missed the competition that race cars gave me and I weighed 217 pounds.  After watching my some compete in cycling, I decided to start riding a road bike with the intention of racing in 2015.  I lost just over 30 pounds over the winter and raced in 5 different states in 2015 with my first ever race being the 2015 Melting Mann.

In 2019 with the help of many others, I began promoting the Dirty Donut Gravel Road Race.  After starting competitive cycling later in life, I found myself getting destroyed in criteriums in my first year of racing.  Many times, I was being pulled from races in the first 5 minutes.  Being stubborn I kept with it, but was discouraged at how unwelcoming the sport could be for newer riders.  Much of what the Dirty Donut is for me is a way of welcoming cyclists to racing in a safer environment that encourages challenges and is fun for all levels of fitness.  It is great to see someone who trains over 20 hours a week having just as much fun at an event as someone who is just getting involved in the sport, or who just enjoys a ride with their friends.