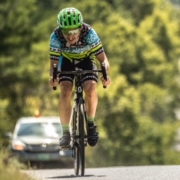 Apologies in advance for this wall of text.  I have never written a race report before so bear with me here.  GMSR definitely warrants mentioning.  Be warned, this is not a tale of success, but rather learning.

As the name suggests, the GMSR takes place over four days in the lovely state of Vermont.  For those who have not been, it is a historic state with towns dating back to the late 1700’s nestled deep in the mountains.  Taking place over Labor Day, the lush wilderness is in full color and the wild life is abundant.  Going on 18 years strong, this is by far the most well run race I have ever encountered.  How the organizers manage 10 separate fields complete with police escort and race convoy with neutral bikes and wheel support is beyond me.  Completing this grueling stage race is perhaps one of my greatest personal physical achievements of all time.

A journey of 12 hours by car through four States is always grueling.  However, once in east Ohio the terrain quickly begins to change from flat (BORING!) interstate to rolling country roads, and eventually mountain passes navigating the Adirondack Mountains of New York.  As dusk turns to night, rolling through pitch black forests on shaky gravel roads with 15% pitches becomes a bit hectic, especially as one attempts to dodge deer and foxes.  Eventually arriving at our Air B&B on the Mad River, Sarah and I meet the others staying with us.  Two older couples, two cat 2 racers, and 2 cat 1 racers are sharing a kitchen and living area with us for the weekend.  Sharing of stories and notes about the course each night helps to put an anxious mind at ease (barely).

Stage 1 consists of a hilly 5.6 mile ITT.  Starting at the “World Famous” (?) Warren store in Warren VT, it climbs 500 feet for 2.75 miles.  From the buzzer I was out of the saddle climbing.  Feeling great, I quickly caught my 30 second man.  Not being allowed to draft and being closely watched, I gave him plenty of room.  Cresting the climb, I had definitely gone into the red.  A steep downhill gave me a chance to recover.  Glancing over my shoulder however, I saw my victim laying down the hammer.  So much for recovering.  Trying not to rubberneck at the glorious mountains and fields around me, I pushed forward to the final dip and climb.  Ouch.  This 100 foot, 10% grade bump comes out of nowhere and is only 400 meters from the finish.  Finishing in 15:50 and 17th in my field, I felt great.  With one stage down and only 1:20 off the leader I had some momentum against the Vermont boys.

Stage 2 was about an hour and 2 mountain passes away from the race HQ in Randolph.  For the cat 2 and above it was a two lap circuit race.  For my field, we only had one 37 mile loop.  I had not fully appreciated how amazing it is to ride on rolling, freshly paved Vermont roads in a fully supported race caravan.  The Peloton was fairly well behaved with only a couple of breakaway attempts.  Being teammate-less, I sat about 10 wheels back and soaked in the views while everyone else chased down the attacks.  As the sprinters took off for the intermediate sprint, I sat in and prepared for the only KOM sprint of the day.  Reeling in the sprinters, we began our approach to the KOM.  By now the pace was really picking up.  With each increase in grade, our pace seemed to speed up.  A group of 20 of us were hammering.  With 5k to go it was a madhouse unlike anything I had experienced.  I went with 400 meters left.  I could almost taste the KOM jersey before it was too late.  I had accidentally lead out 7 of the strongest climbers I have ever seen.  No matter, it was time to descend.  The peloton regrouped at about 40 mph winding down the side of a mountain.  Suddenly it sounded like glass shattering as two riders in front of me went flying in to the trees.  I came to a screeching halt.  Thankfully, I blindly navigated the debacle.  The peloton waited up for about 5 of us before continuing on. Shaking, I hung on for a bunch sprint and 17th (again).  No GC movement, and that was just fine.  I made sure my velo insurance was current that night.

I could barely sleep before stage 3, the Queen’s Stage.  I laid there mulling over the stories and advice of the more experienced house mates.  64 miles and over 6k of climbing.  I felt for the pro/cat1 and cat 2 riders that required an extra 38 miles and 3k feet of climbing.  Mad River point to point road race is Vermont’s shining claim to cycling fame.  Starting on Mt. Ellen, you get a glorious view of the valley and a glimpse of the final climb: Appalachian Gap.  With a 3.1 mile rollout downhill, the scent of burning break pads on carbon wheels really wakes you up.  As soon as the lead car pulled away, teams moved to the front to test the legs.  Once again I maneuvered to 10th wheel.  Today it took some fighting, but I was able to maintain excellent peloton positioning.  The first 20 miles are rolling along scenic Vermont 100 aside the Mad River.  Right as we passed the Air B&B Sarah and I were staying at a group of 9 shot off the front.  Without thinking I jumped in.  The largest team in the field was left off and pulled us in after about two full rotations.  No use trying to burn out 20 miles in to a leg sapping day anyway.  As we descended to the base of our first climb, the sprinters took off again for the lone intermediate sprint of the day.  Pulling them in at the base they looked exhausted having fought each other and a headwind for points.  Then Middlebury Gap began.  The peloton shattered and would not regroup again for the rest of the day.  For 23 grueling minutes we raced to the top of Middlebury.  At the steepest point a rider brushed wheels and collapsed, taking me out.  Jerk.  Quickly I got on my bike, shared my choice words with this guy (of course he is from Jersey) and raced back to the group.  Shattered from the climb, I was ready for my bottle handup from Sarah.  She had just traversed the Lincoln Gap by car, which is honestly more treacherous.  I had raced over 60 miles in hotter conditions and not needed a bottle handup.  That day I learned just how water intensive mountain summits are.

This is where the race begins to turn for me.  I could not descend with the 15 race leaders.  48 mph through turns is something I have never experienced in the mountains.  Multiple times I brushed just over the yellow line.  I decided finishing the race was more important than a head on collision with a car.  Two chasers scooped me up and we continued on.  After 20 minutes of descending, 10 of us were pushing on in the chase.  The pace line held strong.  Middlebury had taken it’s toll on me.  At mile 42, I skipped a turn.  We climbed a nasty 300 foot hill at 12% grade on to a gravel descent.  By mile 44, they were out of reach.  Riders came and went, and the neutral support for the chase left me behind.  I was able to make up a little time on Baby Gap, a mountain before App Gap.  As three of us began up App Gap, I knew it was going to be a monster.  I was definitely over geared.  In my smallest ring, I was screaming over my red line with 6km of climbing left.  Almost a kilometer and a half was at 10% grade.  As you near the top, the trees break and you hear the crowds.  People start running along side chalked roads yelling at the top of their lungs, yet the adrenaline is so strong it is almost silent.  The final 500 meters kicks up to 20% grade and you get the whole road.  The air is so thin every breath comes up short.  There is too much adrenaline to feel any pain.  I pulled away from my 3 climbing comrades in a last ditch effort to minimize GC damage.  As you finish EMS helps you to the coral where they offer PB&J, coke, and a chance to find your lungs.  You can tell by the brutal scene of racers around you at the top that App Gap gets the last at bat.  I recovered in time to go and cheer on Nate Brown (Team Education First, world tour rider) as he took the Pro/1 race before descending back to the parking lot behind the shuttle bus full of spectators with Sarah on board.

As much fun as stage 3 was, I lost time.  20 minutes on the GC leader in fact.  And I placed 29th on the day.  The GC was shattered, and I quickly learned my place as a first year racer.  The final stage was a criterium in downtown Burlington Vermont with a stunning view of Lake Champlain.  It started with a sharp left hander on to cobblestones, another quick set of turns in to a blazing downhill in to a row of storm grates.  Just beyond the grates of death is a steep hill (of course there’s a hill…) leading up to the start/finish.  I lasted 5 laps before I was pulled.  My entire body could not recover from App Gap.  Overall I finished 27th.   The winner of the 4/5 men’s open is an Olympic rower.  In fact, the top 8 riders are destined for cat 2 by next year.

In addition to the spectacular racing it worth mentioning that the surrounding area is full of swimming holes, waterfalls, and great places to eat.  The people in the surrounding towns are friendly and big supporters of the race.

Finishing at 27/56 in the GC leaves A LOT to be desired.  Like I said, I learned more during this race than I have in my entire first year of racing.  Representing TCL colors in the men’s 4/5 open field gave me a sense of pride for Michigan.  I will absolutely be racing this event again next year.  I invite anyone and everyone to join me.  I could tell having team support, even if it was just emotional, was huge for the racers.  Plus, ripping your own legs off and smacking yourself in the face on App Gap is an experience everyone should have.  I hope that this report will convince some of you to join me.